Classes for the magical girl game

The classes for the game are named after the suits of a standard deck of cards. At character  creation you decide to be either a heart, diamond, club, or spade.

Hearts are the healers. Diamonds are the support. Clubs are the dps. Spades are chaos.

Each one has an ability that is unique to them that can affect the card battle aspect off the game.

And along with these abilities, as the players level up they get to choose other abilities to supplement their starting ability.

Perhaps when you level up you get to choose between three things. You get either a.) a heart, b.) a new card, or c.) an ability. Leveling up happens after each episode, so after a Lich, or a nightmare is defeated.

Or, instead of the class giving you the starting ability, the class chooses your starting card, then you can choose an ability that represents your character.

Some ideas for abilities include:
Wish - the Madoka one. You make a wish as  you become a magical girl and it effects the world/game.
Thrill seeker - Putting yourself in danger is favorable for you. Any time you put yourself in a position to lose a heart, you gain advantage to your success roll.
Masochist - Any time you take at least a heart's worth of damage, you gain advantage on your next success roll.
Sadist - Any time you deal at least a heart's worth of damage, you can discard a card to draw a new one.
Knight - You make a promise. This can be to anyone or anything. When in service of this promise you gain advantage to a roll. If you break this promise you lose your powers.
Princess - You gain a familiar.
Druid - You have an animal form that you can access 1/day
Alcoholic - Taking a shot of alcohol grants you advantage to your next roll

Those are some ideas. All can be used in and out of combat, with some of them leaning more towards one or the other.

Posted by Dungeons, Dragons, and Stuff at 3:54 PM No comments:

So this is to be a Deck Building RPG. I don't know if there's many of those. There is a market of card building board games, but the difference between a board game and an RPG is longevity. The rules I've been presenting are definitely meant for a more "one-shot" environment. There's a single deck and everyone draws from it.

RPGs are about progress. Characters starting at a weak point and growing to a strong point. Building a deck based on your battles feels intense.

The desired effect of this game: to add the story/rpg elements of dungeon world/dnd with the deck building aspects of games like MtG or Yugioh.

(This lets PvP be something that is built into the game. Friends build decks to play with each other. Giving this a RPG benefit/consequence will make just playing cards part of the game.)

I think the secret is to have each aspect of the game influence the other, not work together. In Magical Girl anime there's a disconnect between the magical girl powers and their real life, but they both influence each other. A trope of these series is the balancing act of being a normal girl and a magical girl. Perhaps there will be detriments for neglecting either aspect of the game,  adding a sort of balancing act to the two major systems in play.

I was thinking about classes today, and how they are integral to an RPG. There is already a basic class system built into a deck of cards (the suits). And in basic DnD there are 3-4 classes (fighter, magic-user, cleric, rogue).

The idea will be to build a deck of cards that you can draw from in battle. Instead of the randomness of dice being rolled that is present in RPGs, the randomness will be presented by the shuffling of the deck and the drawing of cards. The goal will be to choose your class, to choose your playstyle, and try to collect the cards you need to stack your deck for success.

The course of adventuring will build your arsenal from just one card to an entire deck that you can use.

My goal for myself, my thing to accomplish before even playtesting this, is to have a standard deck of cards named and prepared.

I need to think about the system that I've already presented. If the cards all mean something at different intervals, does that make for an unfair game? What does that even mean?

I'm thinking that the start of each game will be drawing 5 cards, and if you only have 1 card, you just draw that 1 card. That will allow players to choose the suit they want to play (when they have more than 1 card).

Okay, but how do you get cards?

Buying card packs? This can be something for the RPG side of the game. It'll be like a carousing table. You spend the money (much like you spend the gp in dnd) to "carouse" and there will be a list of things that can happen or something. Maybe the cards that they use in battle are special, and it's possible to get them in standard trading card packs. Like Wixoss.

Playing against each other. Players can challenge each other for cards? Idk how this will work because cards won't be added, just traded. Perhaps they give up something from the RPG side, like health or something, to create a card that they then have to play to see who gets.

Going on adventures. Players can opt out of their daily life to go look for cards. They are a power and thus exist like treasure in the DnD world. This would be in detriment to your normal life and consequences will follow.

What benefits could the normal life give to the card battle life? Perhaps different normal life things can give you money to buy cards. I'm really not sure yet.

Going back to class though (I know I'm jumping around a lot), I'm thinking of what system to base it around. I like the Numenera system, or the PbtA system. I need to examine both more closely, but I know that their approach to story gaming, or narrative gaming, is what I want to do more so than DnD's approach.

There's a lot to think about. I tend to do my thinking by asking myself questions, as if in a faux-interview. Maybe I'll do one of those and write another post.
Posted by Dungeons, Dragons, and Stuff at 2:33 PM No comments:

Turn 1
Everyone draws a card
This determines your SET
The Sets are as follows:

Your actions:
Same as turn one
Failure effects for the dual-suites are different and more dangerous
Success means discard both cards

Turn 3
Everyone draws a card
Determine set for all successes
Effect compounds for all failure
Suit doesn't matter for third card in hand
What matters is if it's a number or royalty
Every suit has a branching pattern here
Royalty will be high risk, high reward (risky bet)
Numbered will be low risk, low reward (safe bet)

Your actions:
Same as turn one
Failure effects for 3 card hands are deadly
Success means discard all 3 cards

Turn 4
Everyone draws a card
Determine set for all successes
Wild Card round for compounded failures
Effects stop compounding here, your hand is almost complete
Each card has a specified effect, ranging from 2-Ace
Choose any of the four cards and roll for a success
You must take that failure if you fail
Success means discarding THAT card, retain the other 3

Turn 5
Everyone draws a card
Do all the other shit
Full Hand round for compounded failures
The only thing that matters at this junction is if you have a "winning hand"
Winning hands are:
Royal Flush
Straight Flush
Full House
Flush
Straight
Four of a Kind
Three of a Kind
Two Pair
Pair
The enemy will have a full hand at this point
You place a bet with the monster which they must match*
Better hand wins

*Standard bet would be for hearts, or life for a life, but bets can be anything as long as the monster agrees. It's very much a poker-bluff. You can bet for cards, another player's life, etc. The monster can choose to fold, which means they surrender and you get the treasure/xp/whatever.
Posted by Dungeons, Dragons, and Stuff at 5:24 PM No comments:

The things you need for this system are a D20 and a standard deck of cards.

Everything outside of combat is handled by the players, narrative style.

Some sub rules of this narrative system would be things like:
1. To get something you must give something
2. Bargaining with the DM is fun
3. Saying something convincing is fun
4. Singing a song is an auto success (because I like it)

Combat is where the cards and the dice come in, because combat is dangerous.

Much like the Magical Girl RPG system, Health is based on Successes. Imagine the little heart health bar that Link has. Maybe it'll just be that. Different attacks deal 1/4, 1/2, and 1 or more hearts. Something like that. 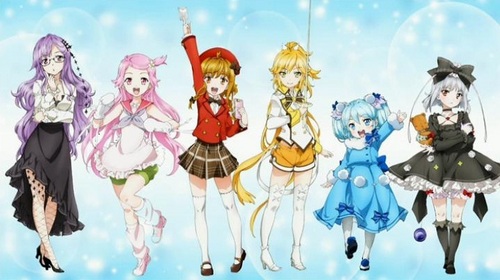 When combat starts everyone draws a card. Monsters and opponents will have set abilities so they won't draw cards. The cards are for the players.

Then, on your turn, you roll your dice aiming to get a success (this will depend on the dice used, I'm considering using 2d12 just because they aren't used often. Success would be anything over a 10, maybe a 12. This is still to be determined).

A success means you spend the card, put it in the discard pile, and do the thing.
1. Hearts = heal one heart, or grant someone (including yourself) an additional heart
2. Clubs = deal a heart of damage
3. Diamonds = prevent the next attack on a target (including weird monster effects)
4. Spades = roll a d10 on the chaos chart

If you begin a turn with no cards in your hand, draw a card.

If you do not get a success, you fail and draw a card at the beginning of the next turn.

The card you draws adds on to the suit you drew first, compounding the effect. The effects will be based on whether you drew a numbered card or a royalty card. (this might get pushed back and maybe the second suit will determine something).

On your turn you roll. A success means you do the new effect and discard both cards.

If you do not get a success, you fail and draw a card at the beginning of the next turn.

The effects compound until you have 5 cards. If you've failed five times you'll have a FULL HAND. Full hands will be powerful if you land a success and traumatizing if you fail.

Full hand effects will show the full effect of magic.

Combat will be dangerous and stressful. Monsters will be tough and/or numerous.

Not sure how leveling/class will work, or if it will be present at all. Cards will be collectible. Different monsters will have different treasure, and different cards collected will have effects on combat and outside of combat.

Cards will be separated into common, uncommon, rare, ultra-rare. They'll be based around the standard card deck, but given lore-based names.

There's a lot still missing from this, but I'm thinking it might be the combat system for the magical girl system. Posted by Dungeons, Dragons, and Stuff at 12:31 PM No comments: